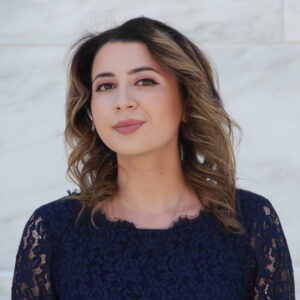 Ashkhen Kazaryan is a tech policy expert. She manages and develops policy projects on free speech, content moderation, surveillance reform, and the intersection of constitutional rights and technology. Ashkhen is the Director of civil liberties at TechFreedom. She also manages outreach and coalition building for the organization and hosts The Tech Policy Podcast. Ashkhen is regularly featured as an expert commentator in news outlets across television, radio, podcasts, and print and digital publications including: CNBC, BBC, FOX DC, Politico, Axios, The Washington Examiner and others. Ashkhen is a board member of the Fourth Amendment Advisory Committee, an Internet Law and Policy Fellow at the IP Foundry, and an expert at the Federalist Society’s Emerging Technology Working Group. She received her Specialist in Law degree summa cum laude from Lomonosov MSU in 2012, Master of Law Degree from Yale Law School in 2016, and is completing her PhD in Law at the Law School of Lomonosov Moscow State University (thesis on Legal Regulation of Art Markets). At Yale Law, Ashkhen served as an Articles Editor of the Yale Journal of Law and Feminism, Senior Editor of the Yale Law and Policy Review and Editor of the Yale Journal of Law and Technology while also being Co-Chair of the Public Interest Fellowship. Prior to that, she worked as the leading legal analyst/law clerk at the High Intellectual Property Court, drafting decisions of the Presidium of the Court.